Have you ever had that funny experience when you learn a new word or about a new product and then you see it come up in your life frequently all of a sudden? I have had that experience with a lot of destinations that are only a day trip away from where I live. It’s like I’m finally hopping on the train with the rest of the people and realizing that there are a ton of places I haven’t been to that I should check out.

So I set out with my trusty travel partner (Luke), and we took some road trips. We planned for them to be cute and adventurous and saw them as a great way to spend time together. And while they were, luck was not on our side. So here you go, a photo collection from our fun but disastrous day trips. First up is St. Augustine, FL. 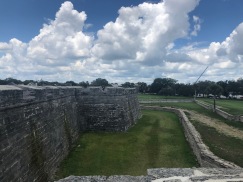 Somehow, and I really can’t explain this, I have never made the drive out to St. Augustine- which is like a staple destination if you live anywhere near north Florida or South Georgia. The first thing on our agenda was the Castillo de San Marcos. It’s the oldest masonry fort in the U.S. and was built all the way back in 1672. Walking around on the top of the Castillo felt amazing with the breeze in our hair and getting to gaze off into the distance at the dreamy Flagler College. Funnily enough, Luke and I actually ran into a classmate from high school. Small world.

After we finished up at the Castillo, we drove around to find parking near Flagler. We ended up finding a great spot behind a law firm where parking was only $10 for the day, whereas the others were $12 or $15 (there was also a really sweet older lady working it who will help you with directions).

Our tour was a lot of fun. You have to pay to go on the tours, but in the middle of ours some random guy came out of nowhere and joined in. He also was carrying a to go cup full of drink and brining it everywhere with him- which probably is against some of Flagler’s rules. Our tour guide didn’t know how to react as all the rest of us were confused where this man came from. At the end, our tour guide Hayley asked us to mention her name if we liked the tour she gave in a review. And she said if we didn’t to put that our tour guide was Henry Flagler. The random man cackled while all the rest of us sat there.

Once we finished our tour at Flagler, we headed out for lunch at Casa Maya. They had the yummiest tacos! And from there we started to explore downtown St. Augustine and headed towards Peace Pie- the business that makes ice cream sandwiches with pie filling mixed in between the ice cream. Highly recommend trying them out.

And while we were eating our Peace Pies the storm started moving quickly and all the power on the street we were on went out. At that point, Luke and I sprinted to his car where we had parked it and decided that it was time to head home. Although we only got to spend four hours there, St. Augustine won my heart over. We didn’t get to tour the lighthouse or the old jail, but something tells me we will be back soon!

Since our St. Augustine trip got cut a little short, the next day Luke and I decided to venture out to Georgia and get some food in Thomasville. We ate at Jonah’s Fish and Grits (which was heavenly) and also visited some of the other locally owned stores. Thomasville really feels like a nice get away from everyday busy life.

And after a day in between, Luke and I hit the road for our third and final day trip together: Ichetucknee Springs and Gainesville.

We got on the road early and were eager for the big day ahead of us. First we planned to visit Kanapaha Botanical Gardens. The gardens were beautiful and very relaxing to walk through. They’re known for their large lily pads and they have Florida’s largest public display of different kinds of bamboos.

The gardens was a lot of fun and I was amazed at how many different species of plants they had. As we were a little over halfway exploring the park, it had started to drizzle and I needed to use the restroom. When we finally got to the only restrooms located in the park and not in the welcome center, I couldn’t get the door to close all the way. Luke pulled it a little and it closed and I was in the room with a ton of bugs. I mean, I killed three mosquitoes while in there (and there were many more) while a dead beetle laid in the sink and moths covered the walls. If you’re like me and don’t like bugs, then this means that you would want to get out of there immediately.

However, when I tried to unlock the door it wouldn’t give! I started to panic and banged on the door so Luke would know I was trapped. I also tried to call him while I was jumping around in fear trying to avoid many of the bugs. My exact thoughts were, “Oh no, he’s going to have to find a gardens worker and they’re going to have to come rescue me. On top of that, I probably broke their lock and they will probably charge me for it!” But once I was able to calm down, Luke told me to step away from the door while he budged it in a little and rescued me. My knight in shining armor <3. 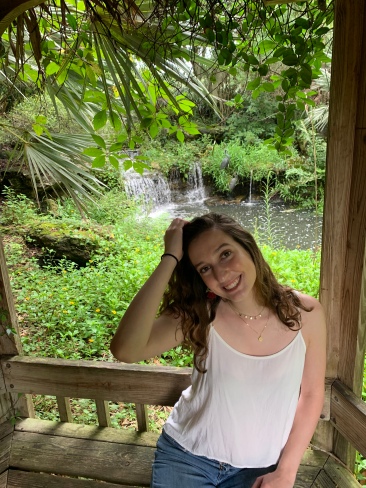 When we were done exploring the botanical gardens, Luke wanted to take me to one of his family’s favorite restaurants in Gainesville. So we braved the rain and headed on over to Satchel’s Pizza, but we knew things probably weren’t going to look too good for the spring.

The pizza was super yummy and had the best crust out of all pizza places I’ve ever had. Satchel’s is really cute because they have tons of different places to eat besides just the main restaurant. Other areas include a renovated van parked outside and the cutest little greenhouse you’ve ever seen! I was bummed we couldn’t sit in the greenhouse, but the rain was coming down. 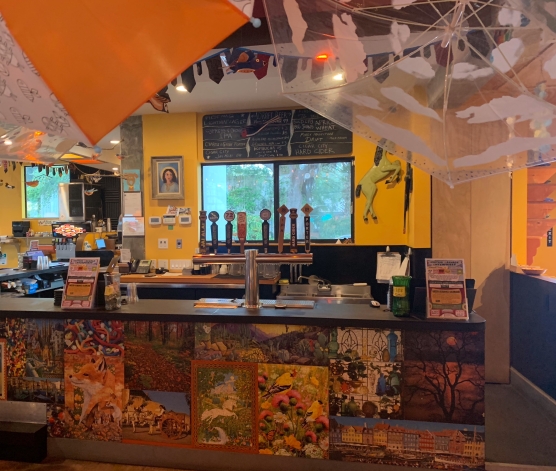 Unfortunately, that meant that we would not get to visit the springs, which was the main reason we traveled all the way out there. That also meant that two of our trips had gotten cut short. We knew there was a chance of rain when we had left that day, but since Luke and I both took time off from work we decided we had to at least give it a shot. Let me know why they call Florida the ‘Sunshine State’.

So that concludes our disastrous but fun road trips. We are going to try to go to Ichetucknee again hopefully before the summer ends. And I know I’ll be back to St. Augustine soon. But for now, it’s time to get back to work and start planning our next road trips!

“The heart of man plans his way, but the Lord establishes his step.” Proverbs 16:9.