Is The Office the greatest show ever? I’ll let you decide… But I think we all know the right answer.

See, what makes The Office so beautiful is that it is about a documentary crew observing characters who are able to find beauty in the everyday things. We get to see each character turn working at a paper company into something magical. We get to watch the characters grow and we get to laugh while we are doing it.

So yeah, The Office is totally worthy of rewatching all the way through for the eighth time. And more than worthy of a blog post dedicated to some of the greatest takeaways from the show (spoiler alert!)

Here’s a list of my favorite life lessons from The Office:

Pam’s art show episode is a turning point in the series. She invites some of her coworkers from the office to attend her show, but not many seem interested. Later we see Pam excitedly standing next to her art and looking forward to showing her passion off. The place is busy and booming with people, but Pam stands alone. She gets discouraged and realizes that no one might actually come. To make matters worse, Roy shows up and tries to brag about the fact that he came and no one from the office did. After walking him and his brother out, Pam comes back to Oscar basically insulting her art with his date and implying that she is uninspired. As the night comes to an end, Pam starts to pack up her art embarrassed and disappointed.

He takes in her art and appreciates the beauty. Michael is especially impressed with Pam’s watercolor painting of Dunder Mifflin. He tells her she ‘nailed it’ and then asks if he can buy it. Michael tells Pam that he is really proud of her and she pulls him in for a hug as her eyes are watery. Michael tells her exactly what she needed to hear.

If you didn’t already like Michael, then this should’ve did it for you. Yeah he’s cringe worthy sometimes, and frequently he makes bad jokes.. But deep down, Michael is good. He showed up when no one else did and he supported Pam. Every single person has amazing qualities, even if you can’t see them at first. Look harder. 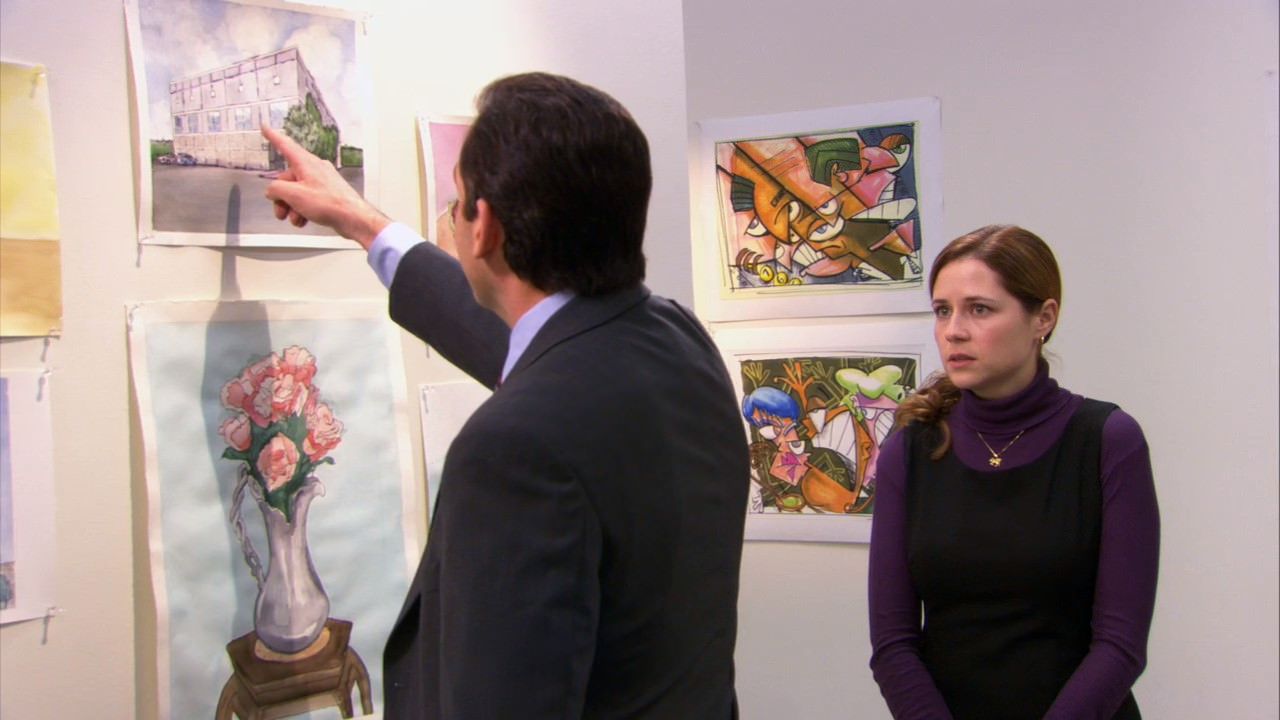 When we first meet Jim and Pam, Pam is engaged to a warehouse worker named Roy. Despite the fact that they’ve been engaged for three years though, they have yet to set a date for their wedding. Clearly, Roy isn’t the one, but we just have to wait it out until Pam realizes that for herself.

When Roy and Pam do finally set a date, Jim is so heartbroken he wants to plan a trip out of the country just so he won’t have to attend. But Jim knows he has to tell her how he feels, and I think we all felt our heart wrench a little when Pam said she couldn’t be with him and that she is still going to get married to Roy. Jim decides to take a job transferring him over to the Stamford branch where he eventually starts dating a coworker named Karen.

Once the branches have to merge, Pam is overjoyed at Jim’s return but not as excited about his new relationship status. Pam takes Roy back and the two are in relationships with people all wrong for them. While being interviewed for a promotion, Jim finds his yogurt lid medal from the office olympics Pam snuck in his file. He withdraws from the position and finally asks Pam out.

They continue to date, and we get a sneak peek at the ring Jim bought one week into dating her. Pam spends the summer in New York for her graphic design courses, and Jim decides he just can’t wait any longer. He asks her to lunch, meets her halfway, and proposes while it’s raining at a gas station. The description of the proposal doesn’t quite sound as romantic as it was, but Jim is living proof that if you really want something, then you will find a way to make it happen. Be persistent!

I don’t think a consensus will ever be reached on what prank Jim pulled on Dwight was the best. From the identity theft prank to the Asian Jim or when Jim put all of Dwight’s desk belongings into the vending machine, the jokes between them are part of what makes the show so great. And Jim and Dwight have one of the best friendships ever. Yes, at first they didn’t like each other. But throughout the nine seasons, we get to see them grow to love each other. Their friendship is special and teaches us all to have a little fun sometimes.

In my opinion, Andy delivers the best line on the entire show. He says, “I wish there was a way to know you’re in the good old days, before you’ve actually left them.” I don’t think I’ve ever related to something more. We are so often focused on the past or the future, that we forget to live in the present. Andy was always bragging about his past- going to Cornell, his amazing acapella group (Long live Here Comes Treble…) But when it was time for him to move onto a different stage in life, he realized he was going to miss all of his friends and memories that he made at Dunder Mifflin. As hard as it is, don’t plan out every little detail in your life. Enjoy the moment and the people you are surrounded by. And just remember that one day, you’re going to miss the good old days you are in right now.

This is the second post in my TV show series. I’m still planning on writing faith based and motivational posts in between these silly, fun ones.

1 thought on “Life Lessons From The Office”